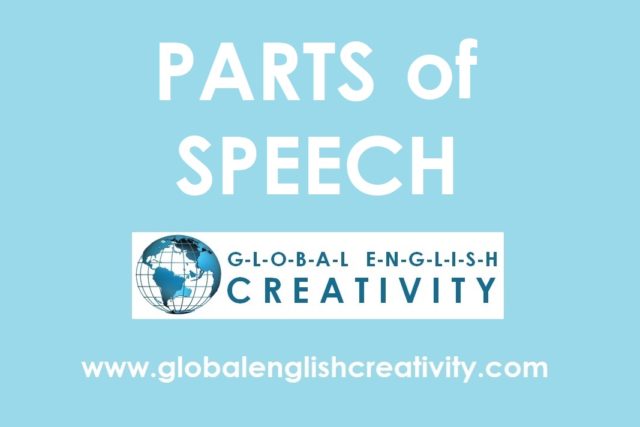 ‘Parts of Speech’ is the soul of language. They are very essential ingredients used in making meaningful phrases and sentences. A real beauty of grammar is obviously the Parts of Speech, as they show us how words relate to each other.

Part of Speech is a category of words which explains how the word is used. It shows how words are assigned with their syntactic functions. It is the major aspect of language which enables us to think about the meaning as well as function of the word. It is very important to note that each word functions independently in sentences.

Due to their different natures and functions in the sentences, words are categorized into eight parts. 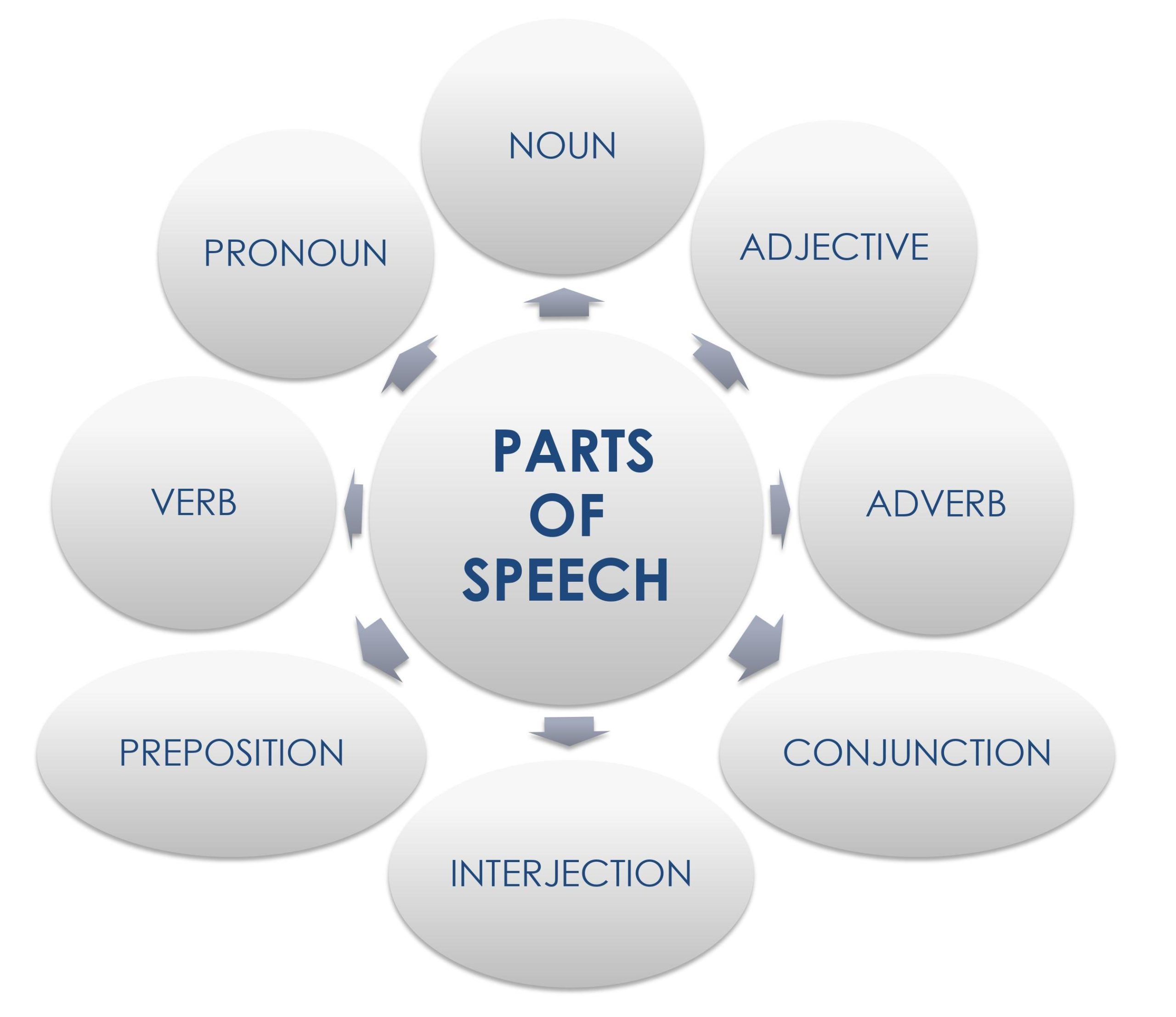 Noun is the word that refers to a thing, a person, a place, an idea, a quality or an event.
e.g. Box, House, Julie, Benjamin, London, New York, Joy, Honesty, Brilliance, Generosity, Day, Lightning etc.

Material Noun
A Noun that indicates a material from which different things are made. It is not counted in numbers.
e.g. water, oil, gold, cotton, rubber, wool, sand, honey, meat, plastic, air, coal, chemical etc.

Countable Nouns
A Noun that indicates the things which we can count using numbers. They are singular as well as plural. Words like ‘few, many, less, little, much, least, one, two, three etc.’ are used before them
e.g.  car/cars, dog/dogs, book/books, house/houses, man/men, thief/thieves, player/players, paper/papers, bag/bags etc.

Compound Nouns
A Noun that indicates the combination of two or more words. Each Compound Noun acts as a single unit. It can be modified by adjectives or other nouns.
e.g. haircut, cowboy, aircraft, baseball, inland, railway, outdoor, landslide, ice cream, gateway, rainbow, bedroom etc.

Possessive Nouns
A Noun that indicates the possession of something. Generally it is formed by adding apostrophes. They are both singular and plural.
e.g. cat’s, boss’s, Sam’s, Mary’s, people’s, Florida’s, sun’s, one’s, shirt’s, dentist’s, children’s, men’s, visitor’s etc.

Personal Pronouns
A Pronoun that indicates a word used as substitute for a particular person. They are used as subject, object or complement.
e.g. I, you, he, she, it, we they, me, him, her, us, them etc.

Possessive Pronouns
A Pronoun that indicates the possession or ownership in a phrase or sentence.  It shows that something belongs to someone.
e.g. my, our, your, his, her, its, their, mine, ours, yours, hers, theirs etc.

Reflexive Pronouns
A Pronoun that refers or reflects back to the subject of a sentence or clause. It is used as a direct object.
e.g. myself, yourself, himself, herself, oneself, itself, ourselves, yourselves, themselves etc.

Relative Pronouns
A pronoun that indicates the connection of clause or phrase with noun or pronoun. They are introduced relatively or dependently.
e.g. that, who, whom, whose, which, when, where etc.

Reciprocal Pronouns
A Pronoun that indicates the mutual sharing of something in person or persons. It is used to identify an action or feeling.
e.g. each other, one another

Demonstrative Pronouns
A Pronoun that indicates something specific, replacing noun. It shows the distance and difference between two things.
e.g. this, that, these, those, such, none, neither etc.

Indefinite Pronouns
A Pronoun that indicates one or more uncertain objects, beings, or places. They do not indicate the specific thing.
e.g. all, any, more, most, both, few, many, neither, none, each, every, some, anyone, nobody etc.

Adjective is the word which provides information about noun or pronoun. Adjective describes or modifies a noun.
e.g. happy, clever, many, few, thirty, hundred, this, that, who, how, a, an, the etc.

Quantitative Adjective
An Adjective that indicates the exact or approximate amount or quantity. It describes the measurement, but not in exact numbers.
e.g. enough, few, any, some, much, more, little, sufficient, whole, all, several, most, each, either, neither etc.

Demonstrative Adjective
An Adjective that indicates relative position of a noun. It helps to identify a specific person, place or thing.
e.g. this, that, these, those

Possessive Adjective
An Adjective that indicates the possession of the noun. It is modifier, which demonstrates noun’s ownership.
e.g. my, your, his, her, their, its, our

Interrogative Adjective
An Adjective that indicates the modification of a noun by asking a question.
e.g. which, what, whose

Distributive Adjectives
An Adjective that indicates the reference of each person or thing separately. It is always used with singular noun.
e.g. each, every, any, either, neither, one, both etc.

Numerical Adjectives/Adjectives of Number
An Adjective that indicates a number or numerical order. It denotes the number of noun, also the order in which it stands.
e.g. one, two, three, thirty seven, hundred, first, second, third, fiftieth, twelfth, last etc.

Articles
An Adjective that is used as Article. Basically, an Article is known as an Adjective. It is used to indicate Definite or Indefinite situation.
e.g. a, an, the

Verb is the word which shows action, event or state. It is known as the key word in the sentence.
e.g. give, write, play, became, made, am, is, are, do, did etc.

Action Verbs
A Verb that indicates an action. It further indicates what the subject is doing or has done or will do.
e.g. run, make, take, give, show, sit, go, write, think, walk, talk, sing, play, bring, dance, jump, think etc.

Action Verbs can be either transitive or intransitive.

Transitive Verbs
– used with an object
– always followed by a direct or indirect object
– accepts one or more objects
Examples–
I like to play football.
We need to keep our body healthy.
Julie loves animals and birds.
Have you cleaned the room?
Did they complete the online course?
Can I use your phone?
Shall we sit in the hall?

Intransitive Verbs
– used without an object
– never followed by a direct or indirect object
– may followed by an adverb
Examples–
The shop opens at 9 am.
The singers sing.
They suddenly appeared.
It rained heavily last night.
Laura rises slowly from her seat.
We stayed in Jerusalem for two weeks.
To die is better than to surrender.

Linking Verbs
A Verb that connects or links a subject to the predicate in the sentence. Linking verb systematically connects to noun or adjective. Grammatically, this noun or adjective is called Subject Complement. Linking Verb proves the power and status of action. It gives information about subject.

I feel very happy when someone praises me.
Sometimes, they behave like a joker .
Antony is fond of reading stories.
It is raining heavily outside.
The boy seemed nervous after exam.
They were in the library when the teacher came.

Helping Verbs
A Verb that comes before the main verb is called Helping Verb. Helping verb and main verb form a Verb phrase. Grammatically, Helping Verb is known as Auxiliary Verb. There are two types of Helping Verb

Modal Auxiliary
can, could, shall, should, will, would,
may, might, must, ought to, used to,
need to, dare to, have to

Preposition is the word which expresses the relationship between a noun and other words. It is always followed by a noun or pronoun.
e.g. in, on, of, over, at, between etc.

Conjunction is the word which links words, phrases and sentences. It is an invariable element of English grammar.
e.g. and, or, but, yet, as neither, so, whether etc. 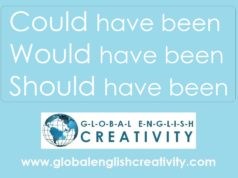 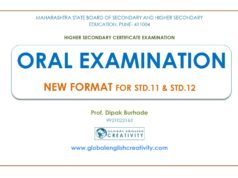 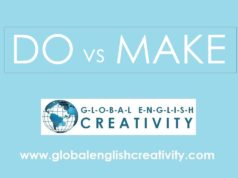 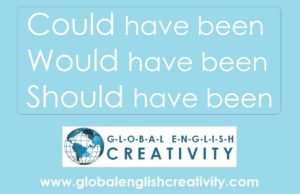 Ways To Think In English